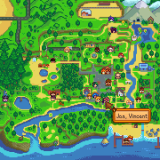 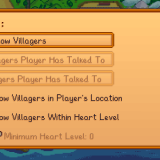 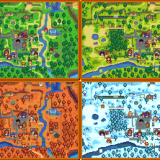 Shows NPC locations on the map. Uses a modified map page that is much more accurate to the game. Includes various settings to customize when to show NPCs. Includes a lot of support for custom mods. Includes a minimap HUD that can be resized in the mod menu and moved around with ALT + drag with mouse.

FOR MULTIPLAYER, THE HOST MUST HAVE THE MOD INSTALLED.
Note: you can’t see the NPCs move around in single player because the game pauses when the map is opened.

List of Features
Redrawn map page that is much more accurate to the game
Accurately tracks NPCs and players (made possible with redrawn map)
Seasonal maps that change with season (including recolored maps)
Multiplayer support
Support for map recolor mods (Eemie’s Map Recolour, Starblue Valley, A Toned Down SDV, Elle’s Dirt & Cliff Recolor). Players can also use other recolor mods by adding them to assets and adding it to the config.
Mod menu for changing mod configuration in-game
Shows locations of farm buildings and cabins
Provides & automatically loads recolored map pages for Starblue Valley & Eemie’s Map Recolour (thanks to Ria aka Riazaia)
Minimap HUD that can be resized/moved around screen/toggled on or off
Lots of configurations for showing/hiding characters including when talked to, when within same location, when within a specified closeness level, quests and/or birthdays, etc.
Automatically adjusts tracking for custom maps (ex. when using Farm mods larger than the vanilla Farm)
Compatibility with LOTS of NPC/map mods, with future-proofing.
Support for custom or modded locations/maps
Support for custom NPCs or NPC mods including new sprites and changed names
Translated for all supported SDV localizations

Minimap (disabled by default)
– Configurations in the mod menu.
– Can be moved around by holding ALT + dragging with the mouse

Using Recolored Maps
In order to use the recolored mod maps for Eeemie’s Map Recolour or Starblue Valley, you must have the CONTENT PATCHER versions of those mods installed.