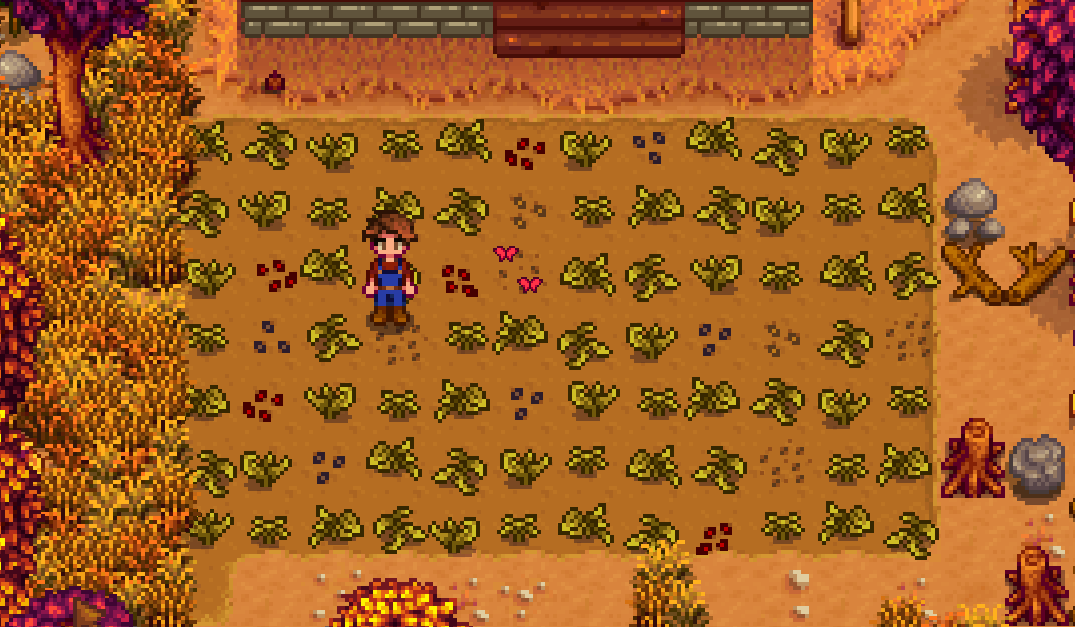 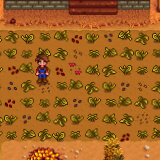 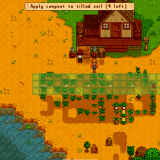 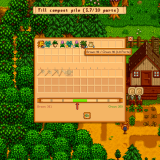 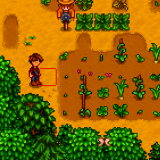 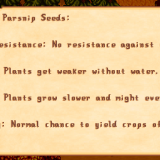 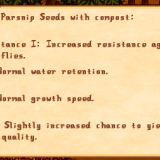 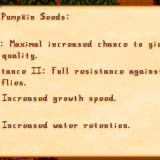 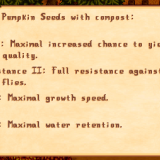 Short Description:
This mod has three main components:
Pests. Vegetable flies have a chance to infest your crops. Only thing that helps is to destroy the infested crop before they spread on the next day.
Crop traits. Using the seed maker to get seeds many times gives the crop a random trait (up to three levels). This can be better quality, pest resistance, faster growing speed or better water retention. Without the speed or water trait your crops grow worse than without this mod.
Compost. You can compost some items (weeds, hay, crops, forage). Compost can be applied to tilled dirt and all crops grown there will gain level 1 for all the four traits. Without compost, growing crops is harder. That means that compost counters the negative effects.

Detailed Description:
The goal of this mod is not realism or to be a challenge. The goal is a more interesting farming progression. Nevertheless, you won’t be harvesting a lot in Spring, Y1. You should also expect to lose a lot of crops.

The main idea behind this all is to force the player to use compost. The soil of the farm you inherited is in bad condition. The crops you want to grow are not adapted enough to grow there well. Applying compost sets the growing conditions nearly to “normal” (vanilla). By saving your own seeds from the crops you grow on your farm you get more adapted crops that can even survive without the compost in their later forms. But before then, you have to use the seed maker a lot and make a lot of compost (which you won’t have in the beginning).

The images above visualize some of the aspects described in the following.

You can get a composting bin constructed by robin. The composting bin has three modes: 1. Getting filled, 2. working, 3. compost is finished. In the first mode, you can put items inside the bin. Possible items are crops, forage, hay, fiber, and few more e.g. seaweed. Different item types have a different brown/green ratio. (This is based on real life composting where green stands for “nitrogen rich” and brown for “carbon rich”). Hay is brown-heavy, crops and forage are green. Fiber is neutral. You need to have a ration of ca. 50% green to 50% brown ( The arrow has to be in the green area). You also need to have enough material to start the composting process. The arrow button (that appears when everything is balanced and enough material was added) starts the composting.
While the bin is working it only shows you how much time is left until the compost is finished (no turning or watering required). It needs 28 days and then gets into the third mode.
When the compost is finished, it can be applied by pressing the ok button. Clicking on tilled dirt on the map applies the compost. It stays there for 28 days. You can click the ok button in every mode to see where compost is applied and how long the compost will stay there until is has to be reapplied.
Crops grown in an area affected by compost will have all their trait levels increased by one.
As in real life, it might be a good idea to have multiple compost piles (one that can be filled, one that is finished, and maybe one that is already working). The greenhouse does not need compost and it cannot be applied there.

Crops can have four different traits and each trait has levels 0-2 or 0-3. Crops can only have level 0-2. The third level can only be reached by applying compost.

Compost increases the level of the trait. Take a look at the images above for examples. You can see this info in the game by right clicking with seeds in your hand on a seed maker for the crop traits or compost bin for the traits including the compost bonus.
In the greenhouse, the negative effects of speed, water and pest resistance are not applied. Hence, crops will grow normally there and never get infested. Positive effects of traits will come into effect. Also, if compost affects a tile where the soil is not tilled, weeds have a chance to grow there, especially if it rained the day before. This can be used to get more fiber and mixed seeds.

Vegetable flies are introduced as pests that infest your crops. The only way to get rid of them is by destroying the crop. Otherwise they will infest adjacent crops and destroy them over time.

Configuration:
Start the game with this mod at least once to generate the config.json in the CompostPestsCultivation folder.
Some chances and other values can be changed.