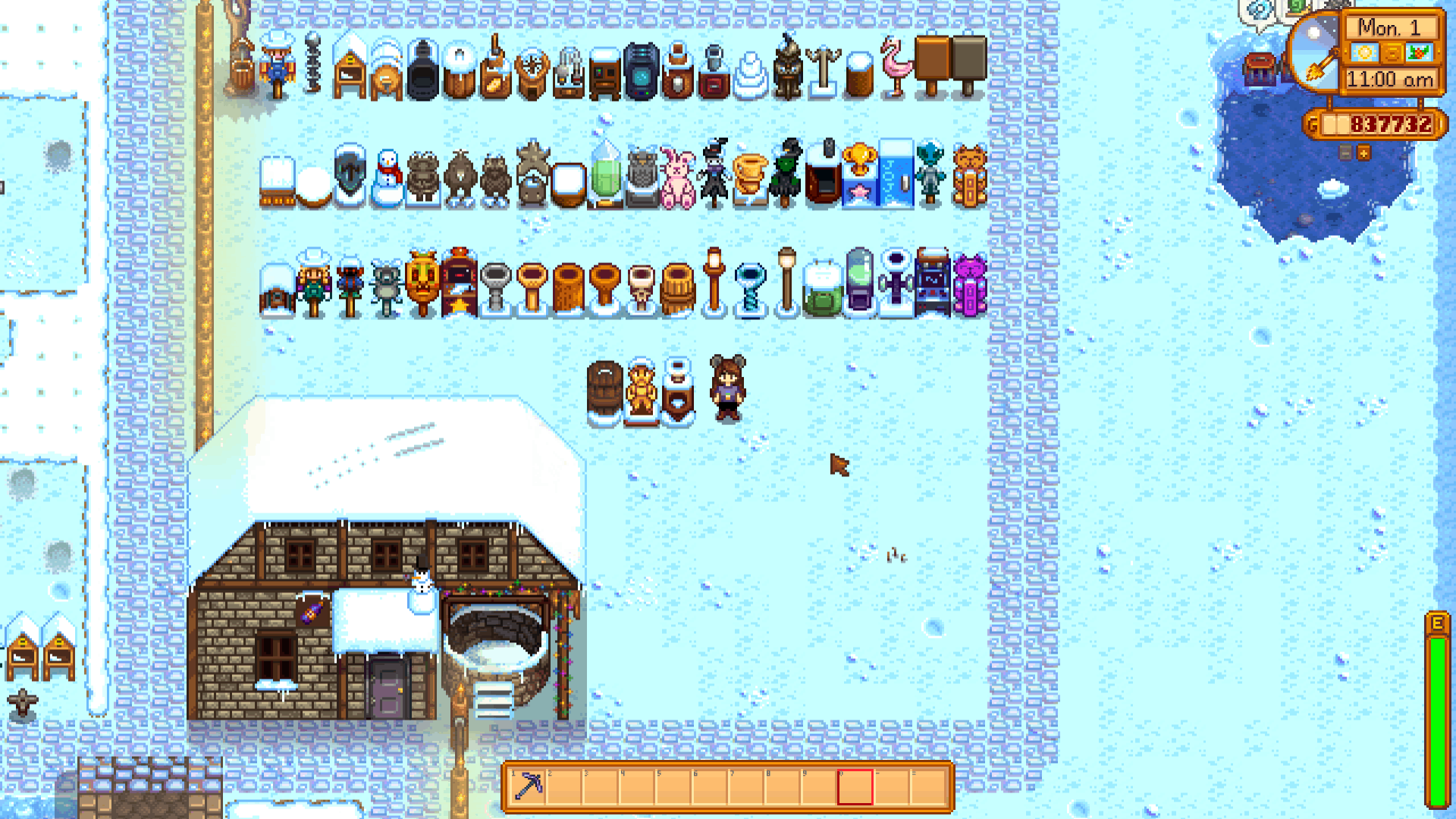 This mod has its roots a long time ago, back when there was no Content Patcher and Seasonal Immersion was the best way to modify buildings and stuff. A small part of Seasonal Immersion’s functionality allowed for two sets of “Craftables.xnb” sprites per season: one that displayed indoors, and one outdoors. I never actually saw a published mod that utilized this feature, at least not for what I wanted: snow-coated objects. Seasonal Immersion allowed me to enjoy my lovely custom buildings looking all cozy and snow-covered, but there sat my Bee Houses looking like it might as well be high summer. So though I am not at ALL, like REALLY REALLY NOT a sprite artist, I tried to fill that gap and create a version of Craftables that actually looked like they’d been sitting outdoors in the snow. Then sadly, Seasonal Immersion stopped working after an update to the game, and Content Patcher was unable to replicate this feature properly, with the only option being to coat all Craftables in snow whether they were inside or outside. I gave up on the project for a while until Pathoschild hinted he might try to add Indoor/Outdoor recognition to Content Patcher, and then my interest was piqued again.

And now here you have it, my clumsy attempt at snowy sprite art (except for the snowmen – those are lifted from the vanilla assets for the most part)! It is very far from perfect, and I would welcome anyone who thinks they can do it better to do so and you’re welcome to take whatever you want from this and use it without needing permission or anything. I only made this because I wanted it so bad and it was too much work to ask someone else to do on my behalf.

Anyway, it uses Content Patcher’s “Overlay” feature, and the included PNG file is ONLY the snow, which means it *can* work with recolors of the craftables, as long as my mod is loaded *after* the recolor mod (this is why I stuck a Z in the folder title; if all your Content Patcher mods use the “[CP]” tag, this should hopefully ensure it loads last). So as long as your recolor doesn’t change the shape of the objects, and gets loaded first, my mod will essentially layer snow on top of the recolored objects. I have tested them with a couple recolor sets to make sure. Note that if the items are not just recolored but “retextured” or the shape of them is different, the snow will look a bit wonky on them. In a later version, I might have each Craftable’s snow individually toggleable, so you can toggle off the snow for any items that it doesn’t fit on, but that would require a lot more written code than what I had to include to do this bit, and I’m not really sure if anyone will care about this enough to make it valuable for me to do so.