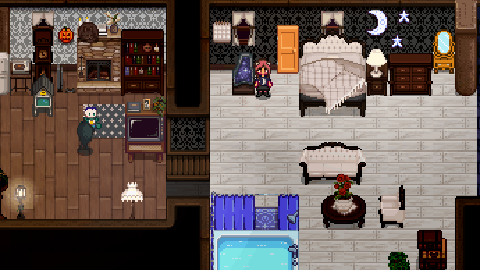 Adds a selection of doors, staircases, and a working minecart that can be placed around your farm to get around faster without editing any maps. Includes three door styles and the mine stairs, with warps to the farmhouse, greenhouse, farm cave, and cellar.

Uses TMXLoader to allow you to place custom warps around your farm/anywhere else you want. This is designed with people who use huge, modded farm/farmhouse maps in mind, as it’s an easy way to add shortcuts without having to edit any map files. If you’re into that kind of thing, you can easily open up the .tmx files in Tiled and change the warp location to the Skull Cavern/your bf/gf’s bedroom/wherever you want to go, basically.

Cellar warps
By default, these only unlock once you actually have the cellar. You can disable this by removing the “conditions” line in the content.json if you like cheating and want to have a cellar from day one.
Options of a 3 tile high “interior” door, 2 tile high “exterior” door, “hatch” type door, or mine staircase.

Compatibility/Known Issues
May not work properly with Immersive Farm 2 Remastered, the optional farm map for Stardew Valley Expanded. IF2R has some issues with TMX buildables due to the way it handles the map loading. If the mod doesn’t work, there isn’t all that much I can do on my end because it’s caused by issues with the framework.
Buildables can be placed anywhere except inside farm buildings. I have no idea why this is and it only came up during testing, but it’s a limitation of the TMXL framework. You can pull up the buildables menu inside the farmhouse, greenhouse and farmcave; you cannot pull it up inside farm buildings bought from Robin, like sheds, coops or barns. The warps should work anywhere else, though, including outside and on other interior maps like NPCs’ houses.

Retextures
Feel free to make retextures and upload them/send them to me to add! Everything except the exterior cellar/farmcave door is vanilla so you don’t need to credit me for retexturing those. The cellar door is from Tainted Cellar and there are some recolors in its original thread; as far as I can tell, it’s cool with the original authors (JinxieWinxie and taintedwheat) to make recolors as long as they’re credited, but to be safe I haven’t included any and probably won’t post any recolors of it officially. The doors from the Compact Bathroom tilesheet (which my bathroom furniture mod uses) will also work as recolors for the larger door.

Future updates
Feel free to request door textures/warp locations in the comments! I’ll probably eventually get around to doing a few retextures of the vanilla doors to match better with interior mods.